Edward Savage: Liberty in the Form of the Goddess of Youth: Giving Support to the Bald Eagle 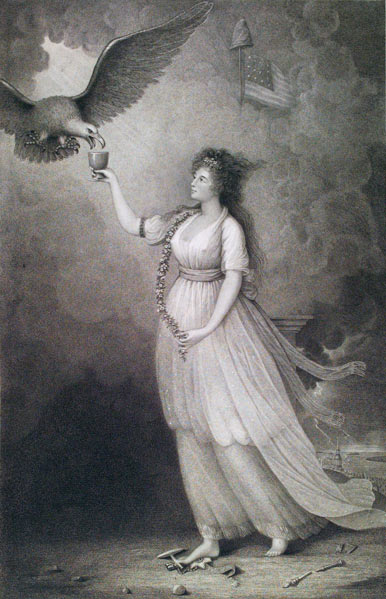 EDWARD SAVAGE
American, 1761-1817
Liberty in the Form of the Goddess of Youth: Giving Support to the Bald Eagle, 1796
Stipple engraving on cream laid paper
Gift of Mrs. Kingsmill Mars
1925.1045

Born in Princeton, Massachusetts, Savage was one of many artist-entrepreneurs of the early Federal period in America. He was the proprietor of a succession of galleries in Philadelphia, New York, and Boston, where he exhibited his own paintings and patriotic prints. In Philadelphia, on June 11, 1796, the artist published this reduced version of one of his canvases. Clad in flowing white draperies and a garland of spring flowers, the newly embodied goddess tramples the symbols of monarchy: a key, the medal and garter of a royal order, and a broken scepter. The eagle, symbol of the Republic, descends on shafts of light, to be nourished by Liberty. The flag of the union, topped by a liberty cap, is visible through the clouds of war, which spew lightning to drive the British fleet from Boston harbor.

The popularity of Savage's composition in its day is reflected by many printed copies. This image was even translated into needlework, as seen in an embroidery in the Museum's collection made in 1804 by sixteen-year-old Mary Green of Worcester (acc. no. 1963.86).