Edward Weston: In a Glendale Studio 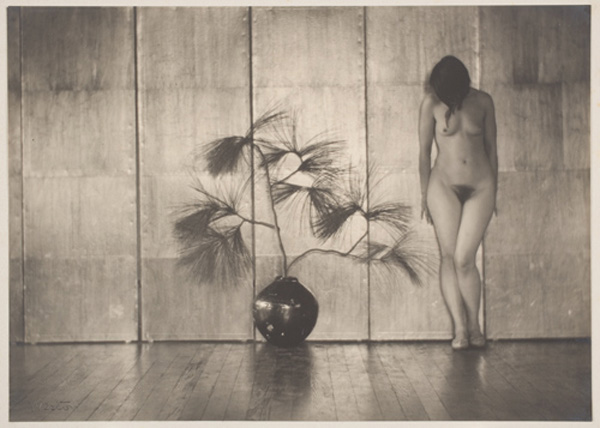 Weston, one of photography's modern masters, pursued a productive career that bridged two styles: the soft-focus pictorialism of the 1910s and the 1920s and the sharp-focus realism that became an established art form in the 1930s. Inspired by Japanese aesthetics, Weston balanced in this image the pine bough in a ceramic jar with the nude figure against a paneled setting. To heighten the expressive quality he exploited the subtle tonal gradations of the platinum process.

Weston's future shift to hard-edge imagery is predicted here in the ordered compositional structure of the scene. He had already produced his first important sharp-focus photographs at the Armco steel mill in Ohio and would soon go to Mexico to evaluate and redirect his work. There he evolved a new vision by emphasizing physical properties- form, substance, and texture. From the mid-1920s until the end of his life, Weston revealed the essence of his subjects through straightforward photographs of shells, vegetables, nudes, and landscapes.