History of the Higgins Armory Collection

Who was John Woodman Higgins? 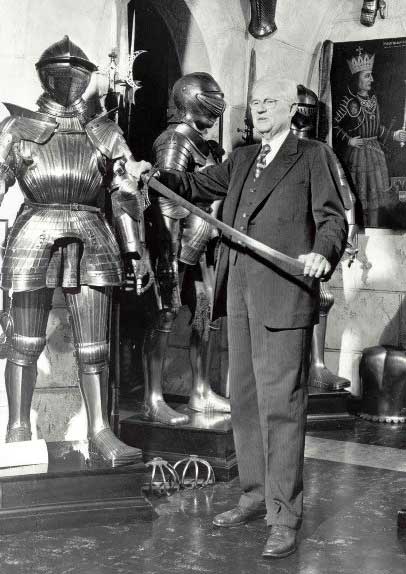 As a young man, John Woodman Higgins (1874-1961) had a passion for medieval tales about knights and castles. Growing up in late nineteenth-century Worcester, then a leading center of American manufacturing, he observed blacksmiths, factory workers, and entrepreneurs, and developed an interest in metalworking and industry. These two passions would merge in the Higgins Armory.

Higgins was the younger son of Milton Higgins, a leading Worcester industrialist. After John's graduation from Worcester Polytechnic Institute, he went into business with his father, and the two subsequently purchased the Worcester Ferrule and Manufacturing Company. In 1905 they reorganized the company as Worcester Pressed Steel, moving it to Barber Avenue in the Greendale section of Worcester. Presteel, as it was known, specialized in sheet-steel products, and an armored knight was chosen as its logo. 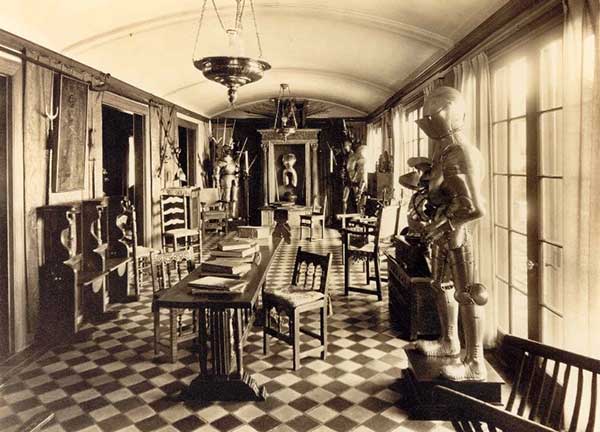 The demand for Presteel products rose during World War I. Among other projects, Higgins produced prototype helmets for American troops based on designs by Dr. Bashford Dean, Curator of Arms and Armor at the Metropolitan Museum of Art in New York. Dean was to become a major figure in Higgins's life as Higgins became involved in armor-collecting. In the early 1900s, a number of wealthy Americans were collecting armor, including newspaper mogul William Randolph Hearst and industrialist Clarence H. Mackay. In the 1920s, depressed economic conditions in Europe brought more armor into the market, and Higgins began collecting in earnest, relying heavily on Dean's guidance.

The Founding of the Higgins Armory

By 1927, Higgins had decided to found a museum. The John Woodman Higgins Armory was incorporated in 1928, and opened in 1931. The Armory was an industrial museum depicting the evolution of metalworking. Built at the front of the Presteel factory, its very design reflected the fusion of old and new. Outside was a cutting-edge Art Deco exterior of glass and steel. Inside, the galleries suggested a medieval Great Hall. The hall was divided into “ancient” and “modern” wings, the one consisting mostly of suits of armor, and the other showcasing modern metalwork, including an automobile engine and a Piper Cub airplane. Visitors were encouraged to tour the factory after viewing the museum.

The museum opened in 1931; Higgins died in 1961, and about a decade later, Worcester Pressed Steel closed its doors. The Higgins Armory continued until 2013, but ultimately the limited endowment to support the museum, including the expensive maintenance of its historical building, forced the Armory to shut down. The collection was moved to the Worcester Art Museum, where it has been instrumental in drawing a new generation of visitors to one of Worcester's cultural treasures.