2nd and 4th Saturdays of the month, 11:30am and 2pm*
Conference Room
Free with Museum admission
Please check our calendar for specific dates and programs.

Join us for these fun, informative programs, and learn all about different kinds of arms and armor, including those used by Roman soldiers, Medieval knights, and more!

All the programs described below are available for private group bookings.

The knight in shining armor conjures hundreds of images and captures the imagination. While the Middle Ages lasted roughly one thousand years (500-1500 CE), the steel plate armor associated with the knight was only in use from 1350 CE onwards. What were its strengths? What were its weaknesses? Learn about the arms and armor used by knights and soldiers of the past in this interactive program. Recommended for ages 6+. 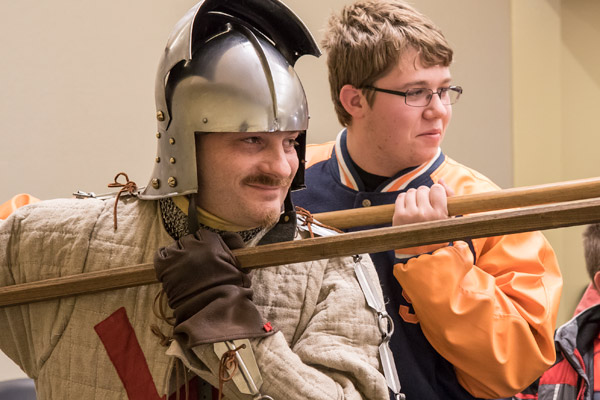 What was it like to be a soldier? How did one live? What was the equipment like? Learn about the Roman Empire from one of its miles gregarious or common soldiers. Volunteer to help the miles show the audience just how effective he and his equipment could be. Recommended for ages 10+.

Barbarians! Pirates! Traders! Explorers! These are terms used to describe the Norse people who, without warning, exploded out of Northern Europe into the consciousness of the world beyond. Unifying the royal authority of England while weakening that of France, the consequences of this period set the stage for much of the Middle Ages. Explore the world of the Vikings through their weapons, armor, and more. Recommended for ages 12+.

In the 15th Century, knightly plate armor became the standard for protection, and it also was the last century to see the knight as the dominant player on the battlefield. Discover how useful armor really was and the changing nature of the world in which it was used in. Recommended for ages 10+.

Why did knights change from using chainmail armor to plate? What were some of the causes? How did the armors work? These are just some of the questions that will be answered in this presentation, a show focusing on the evolution of Knightly armor from the mail armor of the Crusades to articulating plate of the Late Middle Ages. Recommended for ages 10+.