Leisure, Pleasure, and the Debut of the Modern French Woman


This exhibition presents prints and drawings from the eighteenth and nineteenth centuries that illustrate an overall shift in the depiction of women in France. Stereotypically seen in pastoral, aristocratic settings, French women in eighteenth century art are typically portrayed as virtuous role models or dangerous coquettes. However, less than a century later, though depictions such as these still remain, women are portrayed with greater influence economically and socially, and with greater intellectual and emotional depth. The exhibition features works by Degas, Morisot, Tissot, Gauguin, Debucourt, Toulouse-Lautrec, and Cassatt along with other major artists from both centuries.

Select Images from the Exhibition 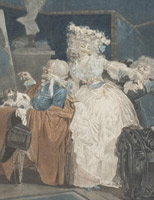