Founded in 300 B.C. by Seleukos, a general of Alexander the Great, Antioch was commonly held to be the finest metropolis in the Greek East. It ranked as one of the handsomest cities in the civilized world, rivaling Alexandria and Constantinople in size and beauty.

Once host to such famous visitors as Constantine the Great, Trajan, Julius Caesar, John Chrysostom, and Diocletian, Antioch was the capital of Ancient Syria and the leading city of the Roman East in the area now known as southern Turkey. Ranking with Rome, Alexandria, and Constantinople as one of the four great cities of the Roman Empire, Antioch's location on one of the most important trade routes between the East and the Greco-Roman world brought it prosperity and a sophisticated culture.

Antioch's benign climate made it a favorite vacation spot and summer refuge from the extremes of heat and dampness known in other parts of the Mediterranean region. Legend has it that in 333 B.C., Alexander the Great drank the water of one of Antioch's local springs and declared it was sweeter than his mother's milk.

The city claimed superiority in water supply, climate, and drainage. It lay just 18 miles from the sea, close enough for easy communication and far enough away for safety from enemy attack. Rich in orchards, fields, and forests, the city provided a plentiful supply of fruit, vegetables, wheat, and timber. An abundant supply of fish was also available in the nearby Mediterranean. Antiochians considered hunting an important food source as well as a favorite sport. They built magnificent buildings by easily acquiring lumber from the forests and quarried stone from nearby mountains.

Commerce thrived in Antioch, and consumers could buy an endless supply of goods in all parts of the city. Women and children filled earthenware water jars to the brim at the plentiful public fountains. In addition, jugglers and acrobats performed wherever they could gather a crowd, beggars danced and piped, and philosophers and orators gave great lectures. Uniformed soldiers were also positioned everywhere, keeping unruly citizens and visitors at bay. Antioch enjoyed public street lighting, which was unusual during that period, and the city bustled well until midnight.

Antioch became one of the finest in the Greek world, distinguished by its learned philosophers and scholars. As the Seleucid dynasty declined, Rome eventually occupied Antioch in 64 B.C. and the city became the capital of the new Roman province of Syria. The new Roman emperors, beginning with Augustus, decided to transform Antioch physically. Augustus enlarged the theatre; lined the main street with famous double colonnades; and built temples to Roman gods and installed statues of their likeness. Other emperors favored the city by building palaces, public baths, circuses, and an amphitheater. Under Roman protection, Antioch continued to flourish on all fronts. Soon after the arrival of the Romans, Christianity became the final and most important factor to shape the life and culture of the city.

In Antioch's cosmopolitan society, both classical and Oriental religious cults were accepted and new ideas were encouraged. Outside of Jerusalem, no community played such an important part in the earliest beginnings of Gentile Christianity. With its excellent communications by both land and sea, Antioch was an ideal base for the missionary journeys of Paul, Barnabas, Peter and other Christian disciples. 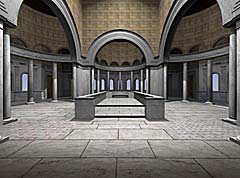 Like New York City and Los Angeles do today, Antioch lured aspiring entrepreneurs from all over the Mediterranean. It became a melting pot of many cultures and faiths with an astonishing variety of people. Among the languages they spoke or read were Greek, Latin, Hebrew, Syriac, and Persian. Their many religions included Egyptian, Near Eastern, and Roman Pagan cults; as well as Judaism and Christianity.

With a diverse population that grew to more than half a million by the 4th century, Antioch blazed the trail in major changes in art, philosophy, and religion. In the words of Libanius, Antioch's celebrated orator, teacher and man of letters, "Indeed, if a man had the idea of travelling all over the earth, not to see how cities looked, but to learn their ways, our city would fulfill his purpose and save him his journeying. If he sits in our market place he will sample every city, there will be so many people from each place with whom he can talk ... the city loves the virtues of those who come to it exactly as it does the virtues of its children, imitating the Athenians in this also."

In the 6th century, earthquakes, plagues, and famine weakened Antioch and it became impossible to defend against invaders from the East. The famous city once called the "Athens of the Near East" was destroyed and lay buried for nearly 2,000 years, until an international team of scholars excavated its ruins in the 1930s.