Heavenly and Earthly Delights: An exhibition in two parts


Many magnificent Japanese paintings have been created to embellish folding screens, a format which has offered Japanese artists the challenge to work on a monumental scale. Compositions and subject sequences, whether continuous or complementary, are read from right to left, across the surface of a single screen, or a pair of screens.

Folding screen masterpieces from the Worcester Art Museum collection, exhibited in two rotations, highlight the differences between two distinctive categories in Japanese art history, namely Chinese-inspired and Japanese-style paintings (kara-e and yamato-e). The distinction was made from the late 9th century onwards. It remained valid as Japanese artists, through subsequent centuries, continued to be influenced by imported Chinese art and culture while also gaining appreciation for the artistic expression of native Japanese tastes and sentiments.

The Essence of Nature in Brush and Ink
May 10 through October 26, 2008
The two pairs of six-fold screens in the first rotation feature idealistic and symbolical themes derived from Chinese art; these are rendered with expressive brushstrokes in black ink and transparent washes. Favored by samurai, monks and literati, such ink painting screens were especially suitable for display in formal reception rooms where they suggested the host's sophisticated taste and inspired a contemplative mood.

Alive in Colorful Display
October 29, 2008 through June 7, 2009
The second rotation includes six-panel and two-panel screen paintings, in the colorful and quintessentially Japanese ukiyo-e (“floating world picture”) genre and Rinpa school styles. The screens depict an array of pleasurable pursuits, customs and stylish kimono enjoyed by the townspeople of the flourishing city of Edo (present-day Tokyo). From the 17th century onwards such lively, decorative scenes, often complemented with gold or silver leaf backgrounds, were commissioned by patrons from the increasingly wealthy middle class.

Byobu, literally “wall-wind” or “protection from the wind,” are Japanese folding screens based on Chinese prototypes made during the Han dynasty (206 BC–220 AD). A Chinese folding screen was first introduced to the Japanese imperial court in 686 AD, as a gift from the Silla Kingdom in Korea. Soon imported from China as well as created in Japan, folding screens were widely used at court and in the mansions of noblemen by mid-8th century.

The Japanese transformed the painted folding screen into a practical and aesthetic component of everyday life and interior decoration. Rooms in Japanese buildings are traditionally measured by their number of woven straw mats (tatami) and are enclosed by panels (fusuma) that slide on wooden tracks. Various activities take place on the mats with the change of a few furnishings. Folding screens, that could easily be carried and configured as needed, brightened and embellished the rooms, setting the mood or indicating the season. They functioned as backdrops for official ceremonies and celebrative banquets or enclosed intimate spaces within rooms, for serving tea, writing poetry, sleeping, giving birth, or committing ritual suicide. Some screens were also used as windbreaks during picnics. Serving specific functions, folding screens consisted of varying numbers of panels (2, 4, 6, 8, or 10). From the Muromachi period (1392-1573) onwards, six- and two-panel screens became especially popular, and were often made in pairs.

The earliest Japanese folding screens were heavy and unwieldy. The panels were made with paper batting covered with silk. They were then individually painted, framed and hinged together at the corners with leather strips or braided silk cords, thread though holes reinforced with wooden or leather washers.

In the 14th century, when paper replaced silk as the preferred painting surface, artisans began to join the panels with lapped paper hinges. Affixed horizontally in alternating directions, from the front of one panel to the back of the next and vice versa, these paper hinges enabled the panels to fold in both directions. They also helped eliminate the individual panel frames, to create a single, continuous surface suitable for large-scale compositions.

The improved construction, with a few modifications, is still used today. Japanese folding screens are now lightweight, durable and able to withstand handling and fluctuations in humidity. The softwood lattice core of each panel is covered with multiple layers of paper to form an elastic surface. The paper sheets in each layer are of different size, arrangement, thickness and quality; the paintings are pasted onto the surface of the final layer. Trimmings, such as brocade borders, lacquered wooden rails with metal hardware and patterned or plain paper for the back, are usually also added. 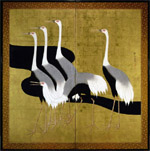