WHO IS THINK AGAIN?
Public artists S.A. Bachman (Boston and Los Angeles) and David John Attyah (Los Angeles) co-founded the artist-activist collaborative THINK AGAIN in 1997. THINK AGAIN's work recruits art-making in the service of public address, collective dialogue and social action. Their projects – featuring billboards, outdoor projections, postcard actions, and artist books – explore social issues including: the flow of international labor; the treatment of immigrants; the cultural value of sexual liberation; the logic of militarization; and the dynamics of economic inequality, gentrification and displacement. THINK AGAIN is committed to working both inside and outside of the traditional art sphere – broadening ideas of socially conscious contemporary art, and expanding notions of art used for community action.

S.A. Bachman is a senior faculty at The School of the Museum of Fine Arts, Boston, and David John Attyah is full-time faculty at Glendale Community College in Los Angeles. Both artists have significant ties to Massachusetts, as Bachman teaches in Boston and Attyah's family is native to Worcester. THINK AGAIN's public projects have occurred in Boston, Los Angeles, New York, and San Francisco, and are documented in their monograph, A Brief History of Outrage (2003). Their exhibitions include the Museu d'Art Contemporani de Barcelona; Arizona State University Art Museum; Maryland Institute College of Art; Exit Art (New York City); Track 16 (Los Angeles); G-A-S-P (Boston); and Outpost for Contemporary Art (Los Angeles).

THINK AGAIN at WAM
THINK AGAIN's Worcester project focuses on the connections between political brutality and public policy, and reconsiders social problems like HIV/AIDS and violence against women. Debuting the week before the Presidential Election, the project promotes dialogue between art and public response, between global reality and local action. “Actions Speak” is a hybrid of text, photography, drawing, etching, sculpture, and digital design. The mural's iconography – a mass of paper bones entangled in the cords of monumental microphones – links political discourse directly to individual bodies. The microphone – a signature image for THINK AGAIN – operates as a metaphor for political possibility, apathy, and censorship. Its entangled relation to the femur bone – a proxy for the body – raises the questions: What is the direct effect of policy on individuals? Who gets to speak and who lives with the consequences? The murals' cascade of words associated with brutality and stigmatization is echoed in a corresponding projection on the Museums' façade. Streetside, the projection of an open microphone, awaiting a speaker, accompanies a succession of words from the mural, out of which emerge words of empowerment and positive action.

WHAT IS THE WALL AT WAM?
The Wall at WAM provides a highly visible space for invited artists to create new, site-specific projects. The Wall at WAM is fundamental to the goal of the Museum's Contemporary Art program, which seeks to function as a laboratory for participating artists and visitors alike. Now in its seventh incarnation, this unique series of temporary projects is sited on a second-story, 17- x 67-foot expanse in the Museum's Renaissance Court, one of WAM's most public spaces, and overlooks 6th-century Roman mosaics, including WAM's Worcester Hunt. On view for an extended period, the Wall at WAM affords artists unique opportunities and challenges posed by its monumental scale, ephemeral nature, and moving juxtaposition of past and present. Previous projects have included paintings, a video projection, and inkjet wallpaper, and have introduced audiences to new work by leading young artists from around the world and New England: Arturo Herrara, Sophie Tottie, Annette Lemieux, Denise Marika, Julian Opie, Jim Hodges, and Alexander Ross. The Wall at WAM has become an invaluable venue for artists and audiences by offering a transformative experience of unfamiliar and untested art of our time in the very heart of an encyclopedic museum. 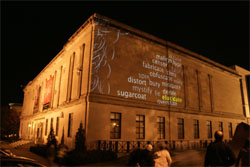 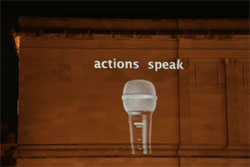 See the Gallery Guide to learn more about the exhibition.

This project has been supported by a grant from the Artists' Resource Trust. Additional generous support provided by the Don and Mary Melville Contemporary Art Fund, David and Marlene Persky, and Worcester Magazine.

Opening Celebration with the Artists