Don't miss the exhibition that the Boston Globe hails as “ingeniously designed…a gorgeous little show filled with pathos and wit.”

This exhibition considers the rapidly changing conditions in China through the lens of new acquisitions created by two young Chinese artists, Chen Qiulin (b. 1975) and Yun-Fei Ji (b. 1963). Both artists have responded to the altered landscapes and human displacement caused by flooding, which is a result of China's Three Gorges Dam project. Chen Qiulin uses video in Bie Fu (Farewell Poem), from 2003, to revisit her childhood memories and China's past amidst the rubble of Wanzhou, her hometown and one of the cities flooded by the dam project. In Yun-Fei Ji's monumental scroll-like painting, Below the 143 Meter Mark, from 2006, allusions to classical landscape painting are transformed by grim contemporary details - houses and hillsides crumbling, a ghost town littered with abandoned bundles and bicycles.

See the Gallery Guide to learn more about the exhibition.


Film & Discussion with the Filmmaker: The Rising Tide
Saturday, August 23, 6:30PM
Conference Room
Admission is free, but space is limited. Film is 92 minutes.
The Rising Tide investigates China's meteoric march toward the future through the work of some of the nation's most talented emerging artists, whose work captures the social and aesthetic confusion created in a rapidly changing society. Produced within the dual context of globalization and urbanization (and including an interview with Chen Qiulin, who is featured in WAM's Two Chinas exhibition), the film examines the confusion and ambiguity that characterize the new China. The Rising Tide captures this momentous time in China's history while exploring the work of artists, who comment with intelligence, wit, foreboding and nostalgia.

The Rising Tide is the directorial debut for independent documentary filmmaker Robert Adanto, who earned his MFA in Acting at New York University's Tisch School of the Arts. The Rising Tide was shot in Beijing, Shanghai, Guangzhou, and Shenzhen in the summer of 2006 and completed in October of 2007. Mr. Adanto will be present at the screening, and will be available for a brief question and answer session after the film's conclusion. For more information on the film and to view a trailer, visit www.therisingtidefilm.com.

A Conversation with Yun-Fei Ji
Thursday, September 4, 6:30PM
The dramatic paintings of Yun-Fei Ji engage us in a dialogue between China's history and its future, responding to the altered landscapes and human displacement caused by China's Three Gorges Dam Project. Don't miss this unique opportunity to hear the artist speak about his work. Reception will follow; free with Museum admission. Funding provided by the Amelia & Robert Hutchinson Haley Memorial Lectures Fund. 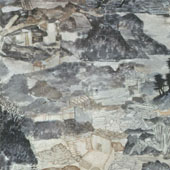