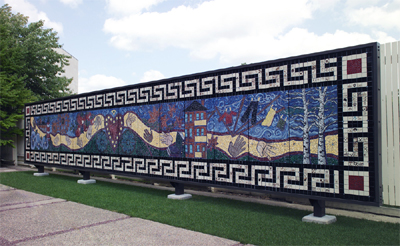 The Mosaic, created in 2000 with the help of more than 1,000 people and 14 community schools and agencies, was moved during the summer of 2005 from its Lancaster Street location to the Worcester Art Museum's Stoddard Garden Court. In its new location, the Mosaic will provide inspiration to year-round Museum students, ambience to summer Café diners, and a backdrop for myriad community events.

“The Community Mosaic has become a touchstone for the community—there are many stories about how making the mosaic had an unbelievable impact on people's lives,” said Honee A. Hess, the Museum's director of education.

Inspired by the Worcester Art Museum's renowned collection of floor mosaics unearthed from the ancient city of Antioch, the 45-by-8-foot Worcester Community Mosaic reflects the themes of “Worcester” and “community.” Its design celebrates the city's diversity, learning institutions, inventors, neighborhoods and culture, including representations of all four seasons, a triple decker, a rocket, books, and, of course, the heart of Massachusetts.

In addition, a dozen community groups including CASA, Rainbow Childcare, and Friendly House among hundreds of other friends of the Museum helped paint 3" square border tiles. Approximately 700 individually painted tiles were needed to complete the classically-styled “Greek key” border that runs around the perimeter of the mural.

· that volunteers from age 5 to 80 plus helped to put together the pieces of Worcester's Community Mosaic.

· that two tile saws were used 10 hours a day for 2-3 weeks to precision cut more than 40 different colors of porcelain tile.

The Worcester Community Mosaic was sponsored by Fallon Foundation and supported in part by the National Endowment for the Arts and the Worcester Cultural Commission, a local agency supported by the Massachusetts Cultural Council, a state agency.