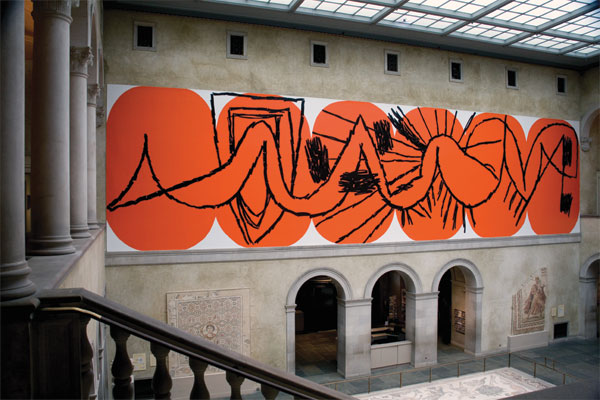 Charline von Heyl has described her drive towards abstraction as the desire to invent something that cannot be named and that challenges the eye in an unexpected way. In her paintings, she often incorporates multiple strategies of paint application and regularly borrows from the conventions of historical abstract painting only to repurpose them through vigorous processes of layering and violating prior marks, surfaces, and spaces. Acclaimed as highly imaginative and experimental, von Heyl's abstraction is built from unlikely juxtapositions and paradoxical superimpositions.

Von Heyl's inspiration for this commissioned mural, part of the Museum's Wall at WAM series, was Ellsworth Kelly's Orange White, a 1961 abstract painting in the Museum's collection (which will be on view beginning February 17 in the new late 20th Century galleries). Both artists, extreme in their use of vivid colors, excel at creating paintings with a sense of play between defined and indeterminate forms, an ambivalence between figure and ground, and a resistance to interpretation.

In a quickly executed initial sketch, von Heyl instinctively adapted the orange and white palette and vertically-stacked lozenge structure of the Kelly to the horizontal demands and architectural setting of the mural. Doubled in number and reconfigured side-by-side, von Heyl's lozenges eloquently repeat the arches throughout the Renaissance Court and create a flat, frieze-like expanse contradicted by her aggressive black gestures. While these intuitive marks playfully yet unpredictably echo the lozenges' arcs and curves and lateral movement, at times they also willfully ignore the boundaries between orange and white or congregate in dense unruly clusters. Decidedly open-ended, these drawing elements reinforce a composition that ingeniously travels back and forth across the wall's expanse.

Von Heyl's challenge in translating her drawing on site at this monumental scale (17 x 67 feet) was to reinvent each gesture with equal degrees of precision and liveliness (the painting process did not allow for mistakes or revisions) in order to keep the overall image, rhythm, and freshness of her original sketch. Simultaneously structured and improvisational, the Worcester mural is a painting that can be experienced as a single expansive composition as well as one that unfolds in contiguous segments spatially defined by the lozenges. In her ambitious reincarnation of the museum's Kelly, the intrepid von Heyl recharges that modernist moment while invigorating both the long history of murals and the current chapter of abstract painting.

Born in 1960 in Mainz, Germany, Charline von Heyl divides her time between New York City and Marfa, Texas. She studied painting in Hamburg and Düsseldorf and participated in the Cologne-based art scene in the 1980s. Following a short stay in Berlin, she moved to New York in 1994. Her work has been exhibited both in the United States and abroad, including solo exhibitions at Westlondonprojects, London; Le Consortium, Dijon; the Dallas Museum of Art; and the Vienna Secession. Von Heyl's works are in the collections of the Musée d'Art Moderne de la Ville de Paris; The Museum of Contemporary Art, Los Angeles; The Museum of Modern Art, New York; and the San Francisco Museum of Modern Art. The artist is represented in New York by Friedrich Petzel Gallery.

This project is supported by the Don and Mary Melville Contemporary Art Fund. Additional generous support provided by David and Marlene Persky, an anonymous donor, and Worcester Magazine. 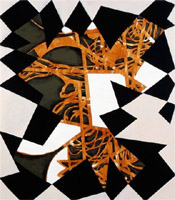 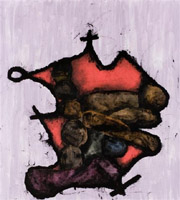 
Artist Talk
Thursday, May 19, 2011, 6pm
The Museum Café
Free with Museum admission
Hear von Heyl discuss her paintings and the Wall at WAM mural
Reception to follow in the Renaissance Court